Machine room less elevators or MRL Elevators work based on a kind of traction or Hydraulic elevators, which require no machine room for the elevator.

MRL Elevators have no fixed machine room on the top of the hoistway. The traction hoisting machine is usually installed either the top side or the bottom side of the hoistway. The motor of the MRL Lifts is installed using a permanent magnet. The magnet attached permanently to the motor. It works with Variable Voltage Variable Frequency (VVVF) drive. Instead of a conventional motor, some machines are used with gearless synchronous motors. This design does away with fixed machine room and hence a lot of building space is saved. Most of the traction MRL Elevators is gearless traction based.

An advantage with machine room less hydraulic elevators is that they save construction time, space, and cost.

A brief history of MRL elevators:

Mr Pickerings invented the very first MRL elevator, the Pickerings Econolift most probably in the 1950s. It was discontinued around the time of the 1970s. In 1996, Mr Kone launched the first ever MRL elevator system "Kone MonoSpace" together with its signature hoisting machine "EcoDisc." It is in the shape of a huge green round disk. Soon many rival companies started to make their own MRL elevator products due to the high success rate of Kone's MonoSpace elevator.

Toshiba had a strategic alliance with Kone and began marketing their very first MRL products in 1998, which was known as SPACEL, another product was called Order SPACEL, which is based on the Kone MonoSpace elevator system. In the year 1999, Mitsubishi company launched their bottom drive MRL elevator named them as "GPQ", which worked on the theory of hosting motor being located in the elevator pit. These days they make DiamondTrac, NEXIEZ-MRL and Elenessa, only for the United States though, with which the hosting motor position is regulated in the shaft.

It is the ultimate energy efficient, effective use of space and natural resources. Green Home Lifts will raise your green compliance a notch higher at minimal expenses. Being a top-notch Home Lift Dealers in Hyderabad, we provide all the comprehensive Home Lift Services in Hyderabad to cater to the needs of across the industry verticals. 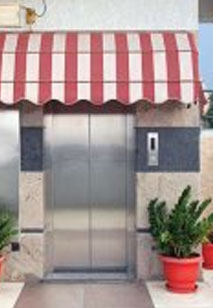